Although there has been a church on this site since the 13th century, the majority of the current building dates from 1952. The re-building was overseen by architect E.C. Butler and occupies an identical footprint to the pre-war church. Alongside the Church, the Parish Centre contains offices and meetings rooms and, unusually, there are two residential apartments within the building. The decision was taken to turn the church on its axis, so we now enter at the east end of the building and the High Altar is at the west end. 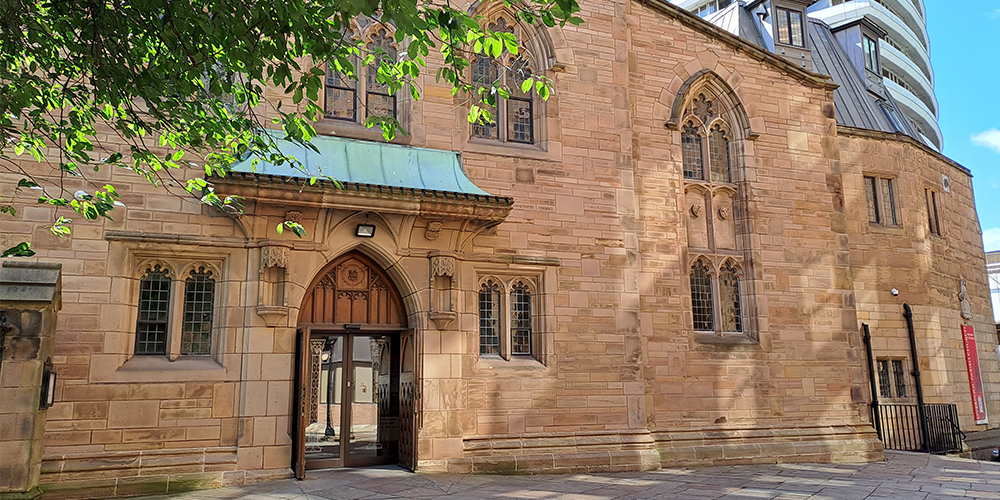 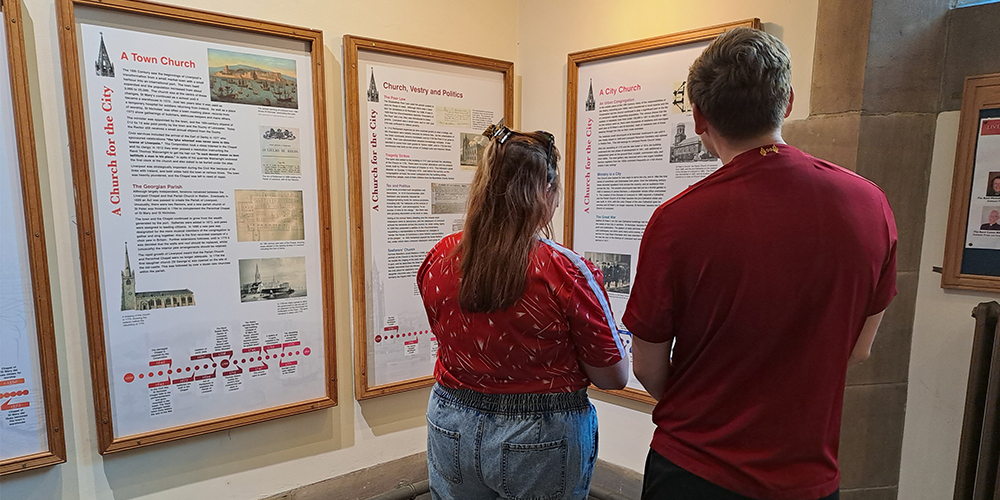 As you walk into the Church from Old Churchyard, the Narthex is essentially a place of meeting. It is hear that refreshments are served after services, and there are a permanent and temporary exhibitions for visitors.

The nave is large and bright. When needed, there is seating for 400 people, and the simple design brings considerable versatility in the space. The height of the roof creates an impressive acoustic, and the gentle gradient down towards the front accentuates the prominence of the sanctuary and High Altar. When the church was reconstructed after the war it was decided that there should be just one stained glass window on the theme of “For the healing of the nations”. A large ‘rood’ (cross) hangs over the sanctuary. 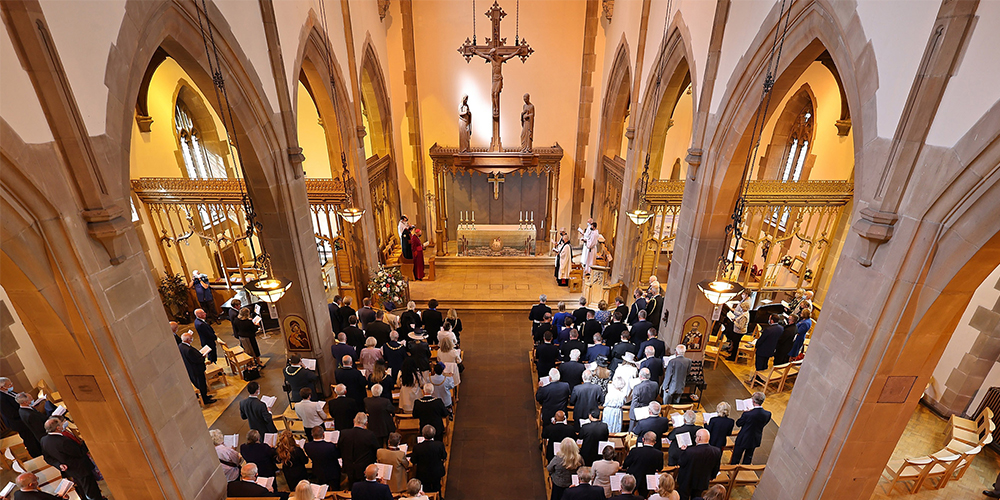 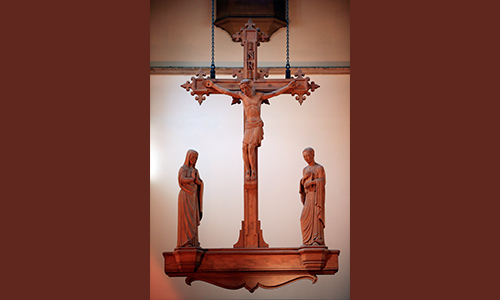 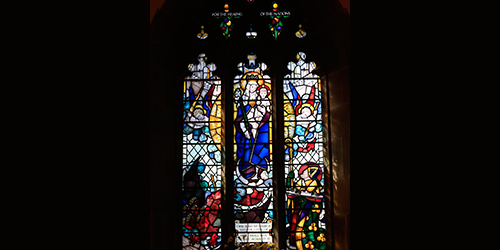 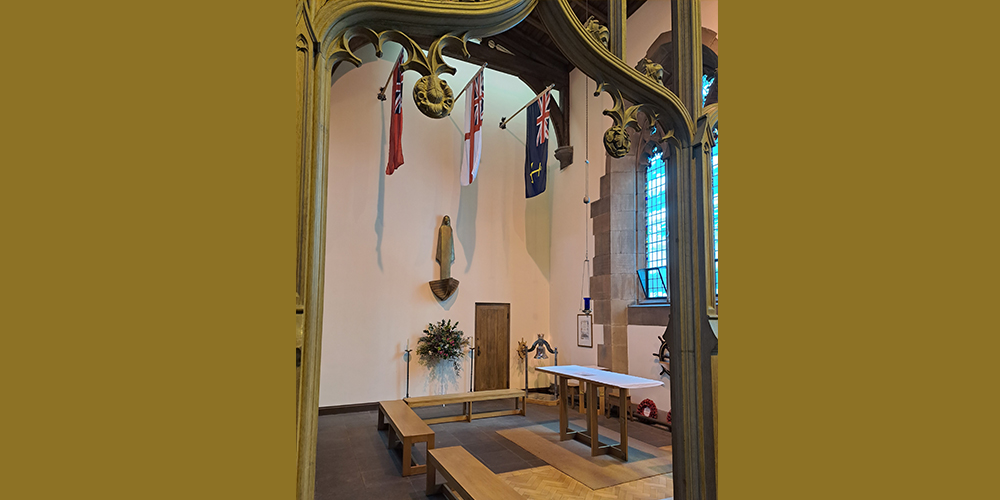 Previously known as St George’s Chapel, it became known as the Maritime Chapel of St Mary del Key following its reordering and dedication in May 1993 as part of the 50th anniversary commemoration of the Battle of the Atlantic. The dedication to St Mary del Key recalls the first chapel on this site, and also the connection to Liverpool’s maritime life. Furnishings are the work of Robin McGhie. There are a number of memorials in the Chapel, but most striking is the bell of HMS Liverpool (decommissioned in 2012), and the flags of the Merchant Navy, the Royal Navy, and the Royal Fleet Auxiliary hang over the chapel.

The dedication recalls the history of the parish by commemorating the ‘other’ Parish Church which was opened in Church Street in 1704. The 18th century altar was once in use in St Peter’s Church. The blessed sacrament is reserved in this chapel. Charred timbers from the old church form a cross on the wall. On the morning after the destruction of the church in 1941 the then Rector, David Railton, salvaged these timbers from the ruins and formed them into a cross. 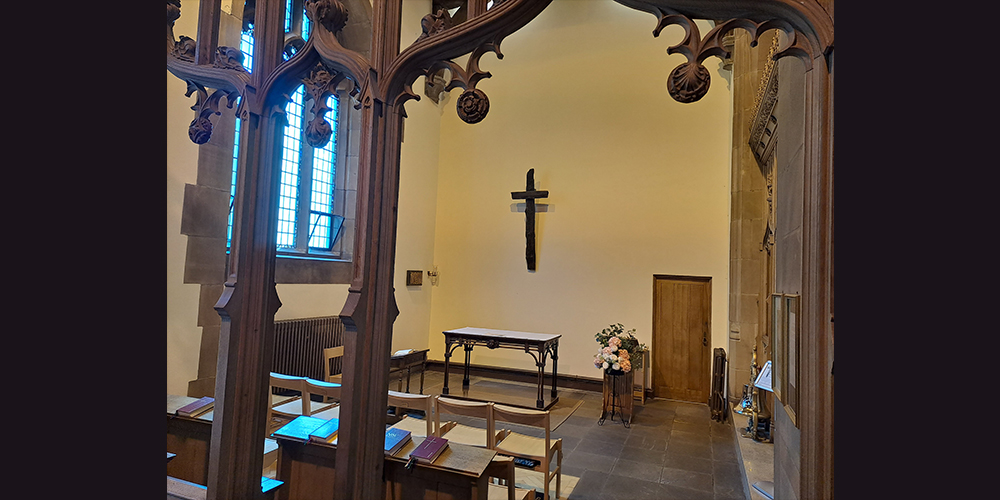 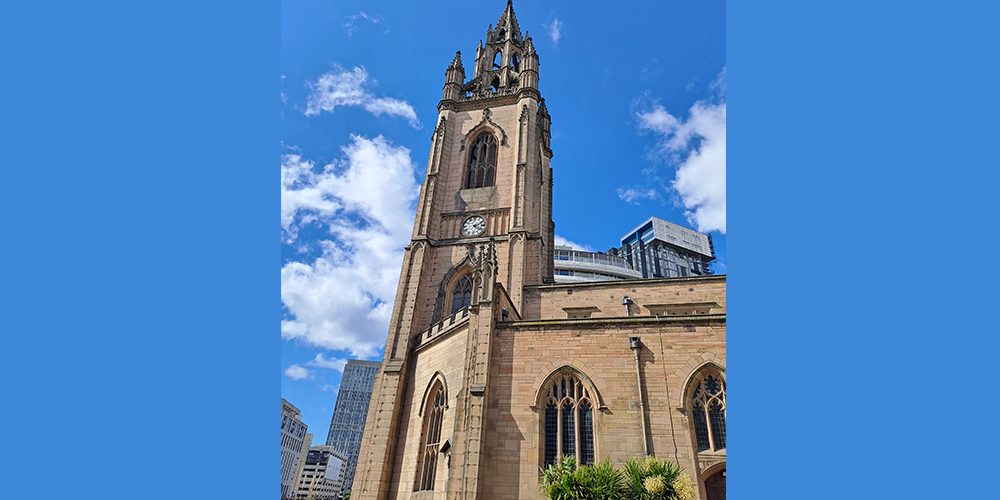 The lantern tower of Liverpool Parish Church is one of the city’s famous landmarks. For over two centuries it has been the last sight of land for those leaving, or the first sight for those returning. Today, those arriving by cruise ship are most likely to be looking out for it. After the collapse of the previous tower in 1810, the new tower was built in 1815 by Thomas Harrison of Chester. The golden ship on top of the tower is from the 18th century and survived the collapse of the first steeple. There are 13 bells in the tower, so even if you cannot see the church, you are likely to hear it.